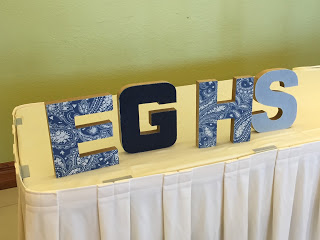 I recently attended my 35th High School Reunion. I graduated from Eau Gallie High School in Melbourne, Florida in 1980! WOW! I’m not 18 anymore!

It’s amazing how going to your high school reunion can send you right back in time and make you feel 18 again. Right back to that same place and that same insecure and unsure person I was then. A little nervous to talk to the “popular” kids. What do we have in common? What is there to say? We don’t travel in the same circles? Afraid to say or do something stupid that would make me seem ridiculous and haunt me for the rest of my days. Back then I spent a lot of time and energy trying to just fly under the radar. “Don’t draw attention to yourself”. “Don’t do anything to get noticed”. If I pretended to be invisible and not care about what was going on around me then there was little chance of getting my feelings hurt. I wasn’t being my authentic self and I may have missed out on a few things. I am not the person who misses out on things now.

It was great to see old friends I’ve known since elementary school. The “girls” have turned into beautiful women and the “boys” are as handsome as ever.  I still see their young faces. In my mind I am walking home from school and my friend is teaching me to count to ten in Spanish. I get excited to walk past the cutest boy in school at his post as the crossing guard. I hurry out the door so that I don’t get teased by that one boy over my “funny” name. My first “real” boyfriend (6th grade) is walking me home wheeling his 10-speed bike along side him. I don’t know where he is now and he has never been to a reunion. I hope he is well. I’ve also lost touch with my best friend from elementary school and I feel sad about that. I was honored to attend her citizenship ceremony.  I hope she is well. I met my best friend Karen about two weeks into 7th grade. We have been friends ever since and for 41 years. She is my sister. We are family now.

I remember one boy from high school who used to annoy the heck out of me. He was funny and goofy and real. The last time I saw him was at the 20th reunion. He knew it would be his last. He died of AIDS before the next reunion. In just fifteen short years people are being saved and same sex couple can legally marry. I would love to have a good conversation with him about that and appreciate his unique personality. More so than I did in high school. As much as I worried about people judging me I was just as judgmental then. I was more concerned about how it would be perceived if I hung out with the kids who were viewed as “different” at the time. So I closed myself off from getting to know interesting people.  I am open to other people’s stories now.

There were quite a few classmates that I did not recognize at this reunion. It was a big class after all and it was five years later. I “met” this really great lady for the FIRST time. Who was she? I don’t remember her. She was sweet and kind and had a fascinating life story. I really liked her.  I would have liked to have known her in high school. I also spoke with a very handsome gentleman with salt and pepper hair. I don’t remember him. I apologized and said “I’m really sorry but the name sounds vaguely familiar but I don’t remember you? His response was “Oh, but I remember you!” What does that mean? How does he remember me? Maybe he was yanking my chain but if he knew me in high school how come I don’t remember him. What makes a person memorable? How would my life have been different if I had been friends with these two intriguing people years ago? Perhaps I did not know myself well enough then to possibly be able to know anyone else. I guess I was friends with who I was supposed to be friends with at the time. I will know them and remember them now.

Thirty-five years later it doesn’t matter if you were the most popular, the prettiest, the funniest, the smartest, the richest, or the poorest kid in school. Back then it seemed that it did. It defined who you were in a group. There were many different groups that existed based on who you were and what you did. You pretty much stayed within your group. My biggest regret is that I was not braver with the courage to just be myself.  I played it safe. I would have joined the volleyball team. I would have loved to work on the newspaper. I would have continued to play the oboe and stayed in the band. I would have paid more attention in Economics class. Maybe I would have tried out for a play. When I was younger I used to practice cheerleading in my front yard for hours. My dad was a coach and I used to study those high school cheerleaders intently at every game. Then I would go home and mimic every move they made. I could do cartwheels and backflips but I couldn’t master a split. By the time I got to middle school I was too afraid to try out because I couldn’t do that stupid split.  I lost my confidence. I played it safe for too many years. If I knew then what I know now I would have at least tried. When you don’t try you fail anyway. The worst thing about fear is that it keeps you from being your true self. I am braver now.

This passage of time has brought wonderful and powerful perspectives on life and who we are. Every reunion reenforces that more and more. We have a shared history with our classmates similar to that of our own siblings. We probably spent more time with our classmates than we did our own siblings. It feels like family and I am so thrilled that the class of 1980 is so close. Through social media it is so much easier to maintain the connections. I’m glad I know who you are. We are deeply connected now.

I’m grateful for the life I have had and honestly would not want to go back to high school or be 18 again. I can be my authentic self now and let you know the real me. The best thing about going to my high school reunion is seeing old friends, making new friends and feeling 18 again for just a little while though. I finally feel like one of the “popular” kids because at these reunions we’re all in the “popular” crowd.
Rock on EGHS Commodores! Rock on Class of 1980! See you in five years!