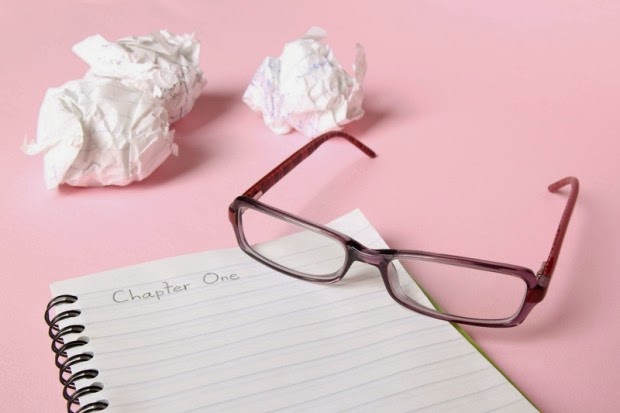 It’s confession time – “Forgive me for I have not written a blog post in awhile”. I have been suffering from writer’s block. For a time this Pollyanna was on a roll. I had loads of great ideas and even made a list of topics to write about. All these super-fantastic ideas would keep me going for months. If I managed to produce just three hundred blog posts then maybe I could compile these into an inspirational book. At least it would be something I could leave to my kids. That would be so awesome!

Then “bam” I was hit with a brick to the head.

As a librarian I don’t always turn to Wikipedia as a reliable source but in this case I do like their definition:

“Writer’s block is a condition, primarily associated with writing, in which an author loses the ability to produce new work or experiences a creative slowdown.”

The article goes on to state various reasons that a writer might suffer from writer’s block such as lack of inspiration, daily distractions or adverse events in one’s life.

By some stretch of the imagination what happened to me could be classified as an “adverse event”. A person that I don’t even know used my blog postings in a critical and disparaging way to form a negative opinion about me and the life I have led. That’s the way I interpreted it. I was hurt and scared. I felt shallow.

In an instant I formulated the belief in my head that my “silly, little blog” was not going to help anyone (including myself) but might actually hurt someone I loved. Then the floodgates really opened. “What were you thinking? You’re no writer. You don’t even know what you’re talking about. You’re just pretending to be a writer like you did when you were a little girl. Did you even read Eats, Shoots & Leaves?” And the worst and most ridiculous thing that popped into my mind was “Do you even remember how to do a tree diagram of a sentence anymore?”.

Ugh! I hate having that Negative Nellie on my shoulder. So I’ve been blocked. For months. It’s not that I have nothing to say but that I’ve been AFRAID to say it. What if I hurt someone’s feelings? What if I get sued? What if my contribution to social media is harmful to someone else? It’s too heavy a burden to bear.

I don’t like to play the “what if” game and I really don’t like to function from a place of “fear”. That’s what this is really about. FEAR. Fear blocks us. I started to think about other “blocks” that we’ve created in our lives. We put up personal relationship blocks, work blocks, fear of failure blocks, weight loss blocks, financial blocks, educational blocks, health blocks and a plethora of other restraints that prevent us from doing the things we want to do. Whatever it is that we are afraid of causes us to creatively and productively shut down.

What would happen if we substituted one of these “other” obstacles for the word “writer’s block” in the Wikipedia definition?

“Relationship block is a condition, primarily associated with being in a relationship, in which a person loses the ability to engage in a new relationship or experiences an emotional, relational or intimate slowdown.”

“Work block is a condition, primarily associated with employment, in which an employee loses the ability to produce new work or experiences a creative slowdown.”

You get the drift. They all impair our ability to try something new and they all slow us down.

Aha! We put up mental road blocks that keep us from physically continuing down the road.

Tim Storey is a motivational speaker and minister who has a new book called Comeback and Beyond: How to Turn Your Setbacks into Comebacks. He says that sometimes people have a setback, get stuck and then “settle in” to being stuck. They just stay in that stuck place for the rest of their life. They never move out of being stuck. I could feel myself settling in and staying stuck. I needed a comeback and I needed it now.

I’ve been scared before and I’ve been stuck before. I’ve had numerous blocks that have prevented me from moving forward. Eventually I sort things out in my head and realize that the biggest thing being stuck does is waste valuable time that could be spent on living.

Anne Lamott in her inevitable wisdom helped me with getting “unstuck” in this situation. In her latest post she talks about turning 61. She wanted to pass on words of wisdom and acknowledge some of the things she had learned in her lifetime. This is what she had to say about the writing process:

“Writing: shitty first drafts. Butt in chair. Just do it. You own everything that happened to you. You are going to feel like hell if you never write the stuff that is tugging on the sleeves in your heart–your stories, visions, memories, songs: your truth, your version of things, in your voice. That is really all you have to offer us, and it’s why you were born”.

You can read the post in its entirety on Anne Lamott’s Facebook page.I have been told on more than one occasion that am a transparent person. I suppose that’s true. I wear my heart on my sleeve and I usually don’t mind sharing my life experiences with others. For the last four months I let the words of someone that I didn’t know get into my head and temporarily restrict me from expressing who I am. I let it get in the way of my story.

Stories inspire, motivate and teach. I learn from the life stories of other people. The best part of being a librarian is listening to patron stories and sharing experiences. One of my favorite broadcasts on NPR is StoryCorps. I follow Elizabeth Gilbert, Anne Lamott, Brene Brown, Glennon Doyle Melton and other motivational and inspirational people just to know their stories. These people that I admire never started out to be writers but life led them to write their stuff down.Like them I have my own stories to tell. I use my blog to do that. I write for myself and I write for others who may be struggling with some of the same issues and emotions that I am feeling. I may never speak on a Ted Talk, share my soul with Oprah or publish a book but I can talk about my experiences and share my stories in the hopes that they will provide inspiration and motivation to others. Because in the end that might just be why I was born.